Sensitivity with regard to personal payment data has become a big topic these days. One of the more recent developments in this field is the idea of linking social media with payment. Venmo, a subsidiary of PayPal and one of the most popular peer-to-peer-mobile-payment-cum-messaging-apps in the United States, may be regarded as a pioneer and as an exemplary case. With Venmo you can pay, share and tattle!

Since Venmo is only available in the US, I learned about its existence when browsing through anthropological literature. What I found interesting is that Venmo (and some similar wallets such as WhatsApp’s payment function recently launched as a beta-version in India) works as a “micro-payment service that integrates with social media so that users can see each other’s payment activity” (Maurer 2017: 216).

Being largely used by millennials and often for rather particular purposes (sharing bills for food and drinks, tipping friends, making donations and payment requests etc.), Venmo creates straight links between payment, identity, group activity and social memory. On that score Venmo is another good example for what anthropologists and sociologists have discussed for decades under rubrics such as “spheres of exchange” (Bohannan 1955), “special monies” (Polanyi 1957), “social currencies” (Graeber 2012) or with regard to social processes of “earmarking” money for particular purposes (Zelizer 1994). These studies have long shown how poorly money is understood if it is regarded merely as a neutral tool of exchange and only as a means of payment. Rather it can be argued through instances of primitive currency up to contemporary ecologies of digital transaction that arranging, re-arranging (and also destructing) human beings or relations between people has always been one of money’s core functions (compare Graeber 2012).

Venmo explicitly challenges the still widespread idea of money’s impersonality and immorality. Or, which may be even more subversive, it challenges the disciplinary morale that financial transactions should better be kept private. Instead Venmo playfully engages with the counterpart of such a morale: the inclination which many people may feel toward sharing what they do, what they have, what they owe, what they consume as well as what and to whom they pay in order to show their presence and embeddedness in social networks and spaces they inhibit.

“Conspicuous consumption” (Veblen 1899, Trigg 2001) is thus a key to understand why Venmo is attractive for users (compare Tung 2015), while the larger implication is also that it needs not be taken for granted that anonymity, abstraction and (social) “distancing” (Simmel 1900) are the true values or vices that explain how money has to work in or affect society.

Now, I am writing this article after I became aware that Venmo uses a public API through which all transactions are made accessible not just to users or group members, but in fact to the entire world. Hang Do Thi Duc, a researcher and media fellow at the Mozilla Foundation just made the notable effort to bring this fact to the attention of a larger public (though it appears to never have been a secret as such). Thus irrespective whether one uses the app or not, anyone can access Venmo transaction data as long as users remain with the app’s standard privacy settings which are by default set to “public”. The intelligence offered includes users’ (actors and recipients) real names and pictures, date of account registration, date of the transaction and, importantly, content of messages that accompany the transactions and which quite often reveal a whole lot of further information. Out of this Hang has compiled a few exemplary and nicely commented datasets to trace transactions (and communications) – for example among lovers or among cannabis-dealers and consumers (though in a legalized setting) – as well as to show how easy it is to identify some users’ diets, attitudes, networks and friends. To get the full picture it is strongly recommendable to consult her website – it’s very accessible, entertaining and highly informative!

Anyone interested can of course directly access the public API here (change the last number in the url to get more or less transactions displayed, use filters to search for key-terms or names, etc.) – it’s in real-time, and well it appears to be an Aladdin’s lamp of information for researchers like me, or perhaps for insurance companies, or stalkers, or marketers, or governments…

For a quick illustration, here is another screenshot of one of the first transactions that (inevitably indeed) caught my eye when scrolling through public api the other day (habitually I have blackened all personal information, though I know this is almost useless as long as any specific information is conveyed at all – to justify: audience was set to “public”): Actor ‘A ‘(female) made a transaction to target ‘B’ (male), obviously paying for “stripping for us” – whatever that precisely means and whatever kind of internal joke, episode, value or intention it may convey among the two parties and perhaps their closest peers. 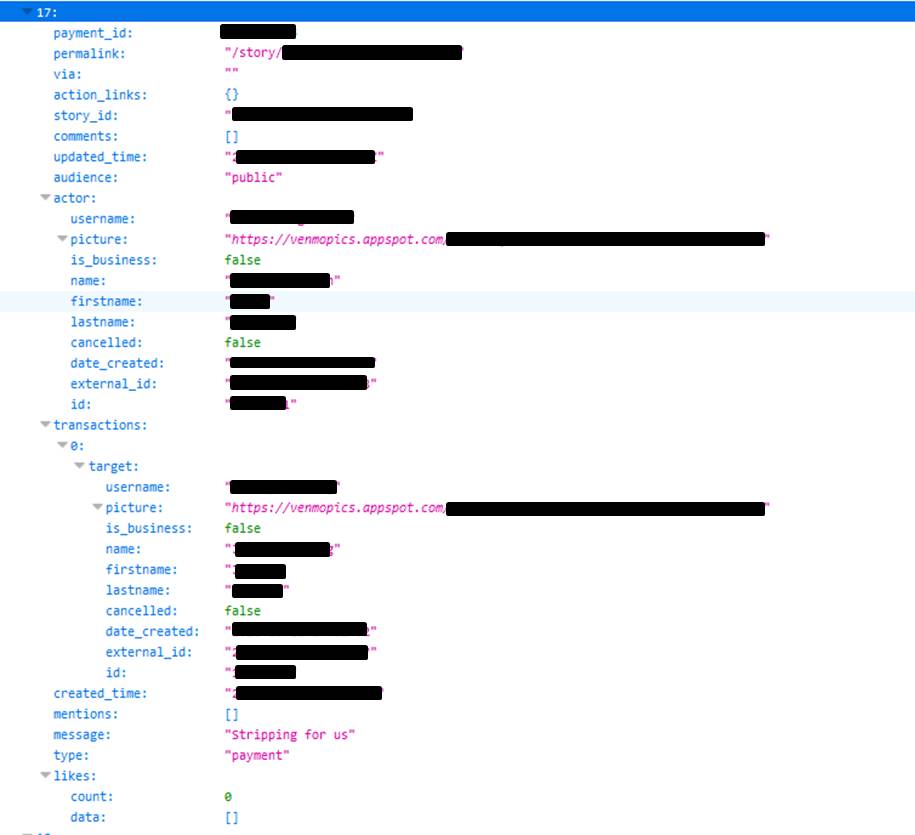 Hang Do Thi Duc’s report comes with a clear and important message: Be responsible when sharing your data, and make sure that you know what you do when you check (or not check) the privacy settings of your accounts (be it Venmo or Facebook or any other). Moreover, be aware that different actors may be interested in your data for reasons that you don’t necessarily expect and that communications may be differently interpreted dependent on whether the reader is familiar with the more intimate context in which a communication took place or not.

However, her research and more so its representation in the media also comes with the rhetoric of having revealed another scandalous data leak. In my view this doesn’t seem just and it also misses the point in some respects.

Venmo’s public API is certainly neither an accident nor a secret as such. It’s not in the strict sense a scandal to be revealed. And here one clearly should keep the context in mind for which Venmo was invented: It is not an “only-payment”-app, it’s a payment-cum-social-media app offering a particular “sphere of exchange” or platform where payment, identity and publicity are purposefully linked. Not all users of Venmo may be fully aware how public their transactions actually are, but the principle must (at least by now) be clear to most of them. Personally I have no doubt that for many users the danger of getting more or less unintentionally identified with certain kinds of (potentially embarrassing) transactions is simply part of the game and thrill – if only for collecting likes and attention or indeed to “earn” a stigma. Along with tokens such as money, audience is a key in many processes of value-creation (see Graeber 2001) and to this Venmo adds with the possibility (not the need or coercion) of getting truly public. After all one might see Venmo’s public api as a straightforward move in a situation where the real threat appears to be the monopolization of the intelligence gathered and the non-transparency of its use by multi-corporate enterprises such as google, amazon or card-service providers. In contrast, Venmo’s public api treats transaction data as a public good.

Eventually discussions should be well aware that the impersonality of money has figured prominently in two kinds of powerful and mutually constitutive discourses: One was the enlightenment-legacy of freedom and in particular the idea that impersonal money has the power to free the individual from both the constraints of (feudal) society and the natural limits of possession (Simmel 1900). The other was as paradox as closely related: namely that money rather than personal responsibility was to blame for whatever went wrong in society. Contemporary incarnations of money and payment, such as Venmo, are geared to turn these assumptions on their head. Today we have many choices of how we actually like to pay, when, where, why and with regard to what kind or degree of audience. Yet if audience is the base for value, choice is the base for all responsibility.

Last but not least, while Venmo is still largely designed for private people and while discussions these days revolve around protecting or not protecting/ collectivizing or not collectivizing personal data – how about envisioning transactions that are really in the public interest? – creating special infrastructures of payment and perhaps public API for the transactions, messages and missions of political parties, enterprises, NGOs etc., offering yet another option to make (and show) responsible choices and to create an audience for value?

With this (and a little bit of curiosity and utopia) in mind, I sincerely hope that Venmo keeps its public API upright!

Graeber, David. 2001. Toward an anthropological theory of value: The false coin of our own dreams. New York: Palgrave Macmillan.

Polanyi, Karl. 1957. “The Economy as an Instituted Process.” In: Trade and Market in the Early Empires: Economy in History and Theory, edited by Karl Polanyi, Conrad M. Arensberg and Harry W. Pearson, 243-269. New York, The Free Press.

Tung, Cameron. 2015. “Cashing Out: How Venmo is encouraging a new kind of conspicuous consumption.” Slate.com. https://www.slate.com/articles/technology/future_tense/2015/03/venmo_and_the_social_niceties_of_discussing_money.html

Veblen, Thorstein.1899. The Theory of the Leisure Class: An Economic Study in the Evolution of Institutions. New York, Macmillan.