Digitization and new directions in the anthropology of money

Ethnographic research has long and significantly pioneered the question how currencies are embedded in space, time and society. Yet, it is also true that foundational texts (Malinowski 1922, Bohannan 1955, Polanyi 1957) were confined (see Melitz 1970) within the discipline’s original sphere of studying “other” societies and, correspondingly “special” or even “primitive” monies – a sphere which subsequent studies often found difficult to reconcile with their home-made claim that while monetization was indeed observed as a globally transformative process, money-proper was statically modern: singular and as alienable in impersonal western markets as it was deemed the particular property or epitome of modern western societies and the neoclassic view on economy (see Hart and Ortiz 2014; on “writing money” see Zickgraf 2018: 9f.).

The past decades, however, have seen widespread paradigmatic changes in the theories, politics and practical applications of money (cf. Lagarde 2018). Financialization and new communication technology have altered the physical, spatial, temporal and legal landscapes of currency in circulation (see Swartz 2018; Leyshon and Thrift 1997). Money, it appears (or rather reappears!) through wired linkages of identity with transaction, debt and the flow of data, does not necessarily have to alienate society. It is not only and not sufficiently understood through economic exchange or as a merely quantitative unit of account and comparison. And though it can, its value also needs not necessarily be backed either by scarce materials or by the authority of nation-states. Rather, as a “total social fact” (Mauss 2002, Zickgraf 2018) and as a common denominator for what people generalize by the name of value, money can and does represent and memorize origins, geographies, networks, deeds, attitudes and (political) community (Hart 2001) while some insiders of the paytech biz (Birch 2014; 2017) go even as far as arguing that identity is just going to replace money in the internet of things and perhaps far beyond (i.e. in an internet of everything – of value!).

Likewise, the issuing of currency itself and, more crucially, the monitoring and control of monetary flows are increasingly subject to a great variety of actors. As a consequence singular conceptions of money “have given way to plural versions not just of money but of the kinds of society [and networks] that it supports” (Hart 2017: 3, cf. Bandelj et al. 2017). Importantly, however, this also leaves people with way more choices of how they’d actually “like to pay” (Maurer 2015) and how they manage their monetary repertoires (ibid., 129f.).

Taken together, these developments have opened a vast new field for anthropologists who not only find themselves literally with monies as their “new exotic” as Bill Maurer noted (Maurer 2006: 18) but are particularly well-placed to study the emerging “kaleidoscope of possible comparisons and connections” (Brown 2018:365), including systems of payment and valuation as well as the “choreographies of circulation and interpretation that surround them” (ibid.).

There’s more to come about new directions in the anthropology of money in my next posts on “moneyness” and on “Action, Audience and Value-add” … 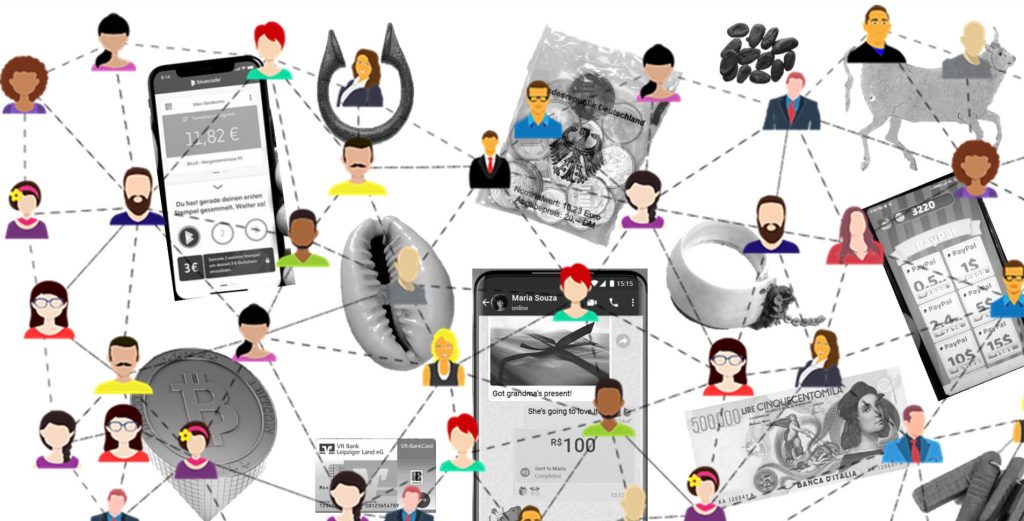 Hart, K and H. Ortiz. 2014. “The Anthropology of Money and Finance: Between Ethnography and World History.” Annual Review of Anthropology 43: 465-82.

Malinowski, B. 1922. Argonauts of the Western Pacific. London, Routledge.

Maurer, B. 2015. How Would You Like to Pay? How Technology is Changing the Future of Money. Durham, Duke University Press.